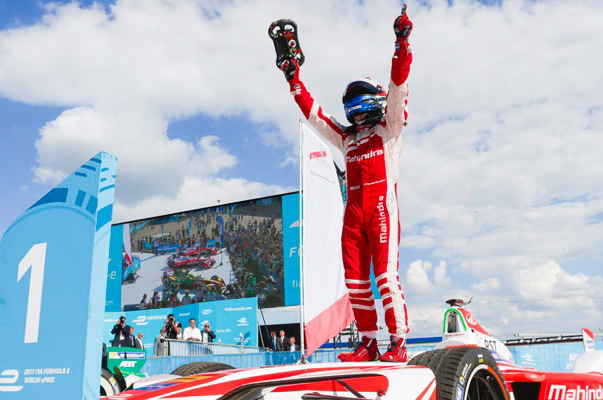 Felix Rosenqvist handed Mahindra Racing an emotional first win in front of a full house of fans at the revised Tempelhofring circuit.

Following the closest-ever qualifying session in the history of the FIA Formula E Championship, Rosenqvist started from third. He moved up to second when Jose Maria Lopez made a slow start, before gradually reeling in early leader Lucas di Grassi.

Earlier in the day di Grassi had taken the Julius Baer pole position by the closest possible margin, out-pacing Lopez by just 0.001s, while Rosenqvist in third was only 0.083s off pole.

The ABT Schaeffler Audi Sport driver was struggling to manage the temperature of the battery during the race, which as a result was making braking and regen harder and harder. Eventually Rosenqvist was close enough to pull off a move, driving around the Brazilian through the long Turn 1.

He almost lost the position when he made a small error into Turn 9 on his in-lap before the mandatory car swap, but he re-joined in front and pulled away to establish a comfortable lead and take a win that delighted the team, after a wait of 28 races.

“It feels incredible,” he said. “From the start of the day the car felt good, quick and consistent. I made a small error in Super Pole qualifying, otherwise we could have been on pole. We came here much more prepared [than when I was on pole in Marrakesh] and it’s a great compliment to the team. We have some fantastic people – I was waiting for this and finally it came.”

After failing to score last time out in Paris, di Grassi needed a big score this weekend. However, after the morning practice sessions he wasn’t too optimistic about his chances, but a stunning effort in qualifying not only earned him pole by the slenderest of possible margins, but three additional bonus points too.

Once Rosenqvist had established his lead over di Grassi, he knew the game was up and shifted his focus to ensuring he stayed ahead of Nick Heidfeld in third and gave the German fans who packed the grandstands plenty to cheer. With the post-race disqualification of championship-leader Sebastien Buemi due to his tyres being under pressure, di Grassi has now reduced the deficit in the title fight to just 22 points.

Di Grassi said: “Our car was not very good, we started the morning completely lost and then tried to make small set-up changes and I luckily did a very, very good lap in qualifying. If you look at the pure pace from the morning – this was not the best race for us, so I tried to hang on as much as I could. At the end of the first stint I started to lose the regen because of the battery temperature being too high and the same in the second stint too.”

For the third race in a row the second Mahindra driver, Nick Heidfeld, stood on the bottom step of the podium. Once again, he made a great start to move up the order, but in his first car he was struggling for pace, and rather than challenge the cars ahead he was fighting to keep away from the pack behind. Following the car swap his pace improved and in the closing stages he reduced the gap to di Grassi to just over a second, but at no point was he ever close enough to attempt a move.

Heidfeld said: “This is a really outstanding result for the team considering where we have come from. In the first car, I was struggling but in the second car I started to catch Lucas a little bit. For a while I thought it might be possible [to catch him] but in the end it wasn’t.”

Lopez ran a relatively lonely race in fourth, but was pleased to continue his recent strong form and add to his points tally. Following his team-mate’s disqualification and Jean-Eric Vergne picking up a five-second time penalty for an unsafe release, Nico Prost maintained his record of scoring in every race this season by taking fifth, while Daniel Abt made an amazing start to gain places off the line, which he converted into a sixth-place finish.

Sam Bird lost out during the pitstop phase, and dropped from fifth to seventh for DS Virgin Racing, while after his penalty was applied Vergne was classified eighth. Venturi’s Maro Engel struggled to manage his energy but was pleased to pick up a couple of points for ninth, while the final point was ultimately awarded to NextEV NIO’s Oliver Turvey. Mitch Evans extended his run of points-scoring races for Panasonic Jaguar Racing to four by nabbing the bonus for the Visa fastest lap.

Now the teams only have a few hours to re-group before returning to Tempelhof Airport tomorrow morning to do it all again for round eight of the 2016/17 FIA Formula E Championship. The pace of the Mahindra cars mark it out as the team to beat, so it will be fascinating to see how much their rivals are able to improve overnight.