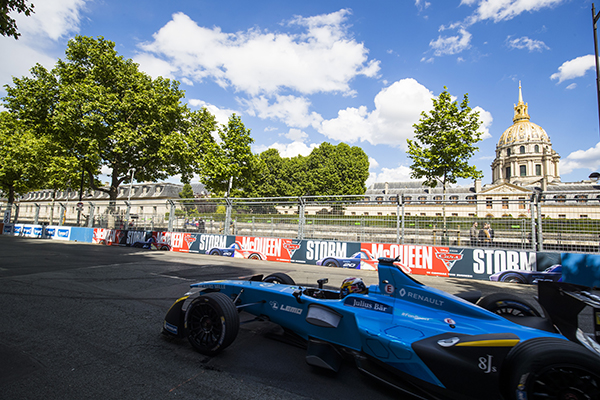 The first phase of the collaboration kicked-off at the Qatar Airways Paris ePrix on May 20 – round six of the 2016/17 FIA Formula E Championship – with extensive branding around the circuit in the French capital, which was broadcast globally across TV and digital platforms, including over 40 EMEA markets.

Additionally, visitors to the race were able to get up-close to the world of ‘Cars’ in the Allianz eVillage fan zone, where a life-size model art installation of Lightning McQueen was on display, along with gaming pods for visitors to try the brand new ‘Cars 3’ console game – Driven to Win.

The trackside activities will continue during the double-header at this weekend’s Berlin ePrix at
Tempelhof Airport on June 10 & 11.

Disney and Formula E will also be producing a series of content featuring Formula E drivers giving their insight into what it takes to be a champion. The content will be refreshed on a monthly-basis throughout the year, and is aimed at both kids and parents. It will feature across Disney’s owned TV and digital platforms, as well as Formula E’s owned platforms.

The partnership coincides with the highly-anticipated release of ‘Cars 3’, which races into UK cinemas on July 14, 2017.

‘Cars 3’ sees the return of the legendary Lightning McQueen (voice of Owen Wilson). Blindsided by a new generation of blazing-fast racers, he is suddenly pushed out of the sport he loves by newcomer and hi-tech racer Jackson Storm (voice of Armie Hammer). To get back in the game, he will need the help of an eager young race technician, Cruz Ramirez (voice of Cristela Alonzo), with her own plan to win, plus inspiration from the late Fabulous Hudson Hornet and a few unexpected turns. Proving that #95 isn’t through yet will test the heart of a champion on Piston Cup Racing’s biggest stage.

Tricia Wilber, Chief Marketing Officer at The Walt Disney Company EMEA, said: “The ‘Cars’ franchise and Formula E complement one another perfectly in creating an authentic and meaningful partnership, and we look forward to a great long-term collaboration between us. The drivers in the series embody the dedication and determination also seen with our characters and enable us to highlight the key qualities which anyone can use to be a champion.”

Ben Padley, Global Marketing and Brand Director at Formula E, said: “Teaming up with Disney epitomises the uniqueness of the FIA Formula E Championship and our ability to engage the next generation of sports fans. Formula E races in the centre of the most iconic cities in the world and our collaboration with Disney is a truly authentic way to showcase our electric street racing series and the raw driving skills of our drivers.”